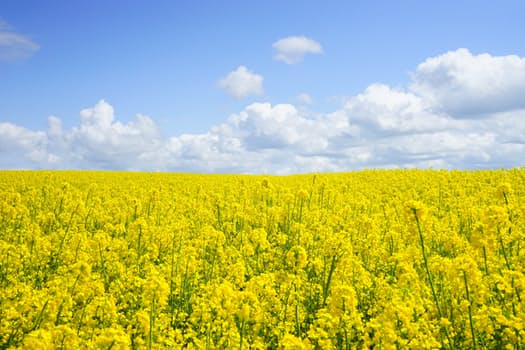 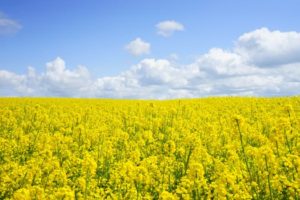 University of Copenhagen and Bayer CropScience have successfully developed a new oilseed crop that is much more resistant to heat, drought and diseases than oilseed rape. The breakthrough was published in the journal Nature Biotechnology.

The mustard plant is similar to oilseed rape in many ways. It looks like a rape plant and its oil has the same attractive features with high content of mono- and polyunsaturated fatty acids e.g. omega-3 and -6 plus antioxidants and vitamins. However, it is also a lot more robust when grown under arid conditions and upon exposure to diseases. Mustard is therefore an obvious candidate to replace oilseed rape that does not grow very well in warm and dry areas.
The nutritional value of Brassica seed meals is reduced by the presence of glucosinolates, which are toxic compounds involved in plant defense. “Until now it has been an undefeatable challenge that mustard seeds are full of the bitter compounds that give mustard its characteristic flavor. Consequently, the protein-rich seed meal that remains after the oil is pressed out of the seeds is useless as animal feed,” explains prof. Barbara Ann Halkier, Head of DynaMo Center of Excellence,University of Copenhagen.

The scientists from the DynaMo Center have invented a technology that can keep the bitter defense compounds out of the seeds while maintaining them in the rest of the plant so that the plant can defend itself against herbivores and pathogens. They mutated the genes encoding two glucosinolate transporters (GTRs) and reduced glucosinolate levels in seeds by 60–70%. Successful translation of the technology from model plant to two Brassica crops suggests that their approach could be broadly applied to reduce seed glucosinolate content in other oilseed crops.

Scientists from Bayer CropScience have implemented the technology in the fields and performed large field trials with the mutant mustard plants.
In the coming years, the scientists from University of Copenhagen and Bayer CropScience will work towards reducing the content of bitter defense compounds in the mustard seeds even further. They expect to have a mustard plant with mustard-free seeds ready within 2-3 years.